Easter Is Just Around The Corner

With Easter just around the corner we may think about eggs, rabbits, chicks, daffodils and blossom. All of which represent new life. Don’t forget your Easter Eggs buy here, they are selling fast.

As a pagan tradition it is the beginning of growth and new life after the cold, winter months. The name comes from the Anglo-Saxon goddess of the dawn and spring – Eostre. It celebrates life and rebirth, which is why we see lots of symbols of new life and fertility.

Easter is the oldest and most important festival for Christians. It celebrates Jesus Christ’s resurrection from the dead three days after his crucifixion with a message of new and eternal life.

Egg Rolling
Some of our oldest traditions include Egg Rolling down. This tradition is thought to represent the rolling away of the stone from Jesus’s tomb before his resurrection.

The tradition of Egg Rolling goes back hundreds of years with an annual competition held at Hocombe Hill near Ramsbottom or Avenham & Miller Park, Preston in Lancashire on Good Friday.

If you want to buy something different to give as an Easter present how about our Pewter Egg Cup and Spoon Sets or a Traditional Seminal Cake these are bound to be the talking point of the celebration. 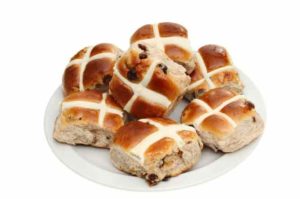 The tradition of eating hot cross buns on Good Friday has its roots even further back than early Christianity. Buns marked with a cross were eaten by the Saxons during their spring celebrations – it’s believed that the bun represented the moon and the cross the moon’s quarters. Christians continued the tradition but to them the cross symbolises the Jesus’ crucifixion.

The English custom of eating spiced buns on Good Friday was probably established in Tudor times, when a London bylaw was introduced forbidding the sale of such buns except on Good Friday, at Christmas, and at burials. The first indication we have of a cross appearing on the bun, in remembrance of Christ’s cross, comes in Poor Robin’s Amanack (1733). This year the winner of the Daily Telegraph best Hot Cross Bun challenge is M&S