To me, St Georges day conjures up a vision of the red and white English flag of St George, red roses, dragon slaying, Morris dancing and roast beef. But where did this start?

Who Was St George?

St George was a Roman soldier who protested against the persecution of Christians in 245-313 AD. As a result, on the orders of Emperor Diocletian he was imprisoned, tortured and eventually beheaded in Nicomedia, Palestine on the 23rd of April 303 AD.

The red cross of St George on its white background was adopted by Richard the Lionheart who brought it to England from the Crusades in 1192, and whose soldiers wore it on their tunics to avoid confusion in battle.

St. George was adopted as the Patron Saint of England after the English won the Battle of Agincourt in 1415 and in his honour 23rd April was declared a national feast day and holiday in England

Shakespeare famously recalled the victory in this famous speech from his play Henry V (Act III, Scene I):

“I see you stand like greyhounds in the slips,

Straining upon the start. The game’s afoot:

Traditionally the St George’s flag would flown, a red rose would be warn in the lapel, roast beef and ale would be consumed in large quantities and festivities would take place to mark St Georges day. Whilst these traditions fell out of favour for some time they have been undergoing a revival with celebrations being organised around the country.

So to the Roast Beef

Synonymous with England this culinary delight will be found on the menu right across England on St George’s day. Why not give it the extra special finish it deserves by serving it with Luxury Horseradish Sauce by Cartwright and Butler or treat yourself to the Luxury Condiments Box for to celebrate the traditional roast dinner.

And if you would like to go and celebrate why not try one of the following:

Salisbury – Annual parade, the origins of which are believed to go back to the 13th century

Coventry – Blast from the Past St Georges Day celebration in Broadgate.

The story of St. George and the Dragon was a legend brought back by the Crusaders written in about 1275.

According to the legend the dragon made it’s nest by the fresh water spring near the town of Selena in Libya. When people came to collect water, they accidentally disturbed the dragon and to prevent them being killed they offered two sheep every day to satisfy its hunger.

Eventually there were no more sheep left to offer the dragon and so the people of Selena decided to choose a maiden from the town by drawing lots. The princess was chosen to be the dragon’s next victim despite protest from the king. Just as the princess was about to be offered, St George, a knight from the Crusades was riding by on his white stallion. He dismounted and drew his sword, protecting himself with the sign of the cross. St George fought the dragon and cut off its head thus saving the princess. The people of Selena were so grateful that at the request of St. George they abandoned their pagan beliefs to convert to Christianity. 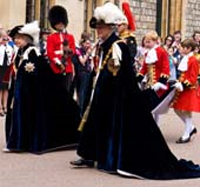 The Order of the Garter

In 1348, King Edward III created the Order of the Garter in his name . It is the oldest order of Chivalry in Europe. and one of the highest honours Britain’s monarch can bestow). The order is awarded on the 23rd April by the reigning Monarch.

The Insignia of the order consists of a collar and badge appendant known as the George, the Star, the Garter and the Sash with the Investment Badge called the lesser George. This is a gold and richly enamelled representation of St George on horseback slaying the dragon.

The beautiful St George’s Chapel at Windsor Castle, is the chapel of the Order. When founding the new college of St George at Windsor, Edward III linked with it a small group of knights, each of whom was provided with a stall in the chapel. This comprised twenty-five men in all with the king at their head and was entitled the Order of the Garter after the symbol of the garter worn by its members.