200 Years of Jane Austen And Still As Popular As Ever 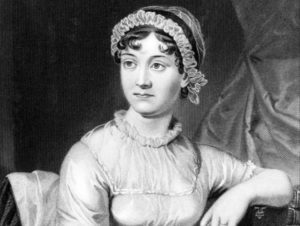 Jane Austen is one of the most celebrated of English writers known mainly for her six major novels. Sense and Sensibility, Pride and Prejudice, Mansfield Park, Emma, Northanger Abbey, and Persuasion.

Her books make interesting reading to those who enjoy historical novels as they give an insight into the British middle and upper classes at the end of the 18th century and are particularly noted for their wit, social observation and the documentation of lives of women of that era.

Born on 16 December 1775 in the rural village of Steventon in north Hampshire, England. Her father was a clergyman and she was one of eight children.

After the death of her father Jane, moved several times with her mother and sister eventually settling in Chawton Cottage, a cottage on the Chawton estate in Chawton, Hampshire where she spent the last eight years of her life.

Interestingly Chawton is close to Steventon where she was born.

Jane began writing as a teenager. Her brother Edward is thought to be the inspiration of her writing and helped to get her works published.

Her first novel, ‘Sense and Sensibility’, was published in 1811with the author being titled “A Lady”. All subsequent novels were attributed to the author of “Sense and Sensibility” Her novel ‘Pride and Prejudice’ was initially entitled “First Impressions”, which Jane described as her “own darling child” and ‘Emma’ was dedicated to the prince regent (George Augustus Frederick, Prince of Wales), who was said to be an admirer of her work.

All of Jane Austen’s novels were published anonymously allowing Jane the ability to observe people, and transform them into the characters in her novels.

In 1816, Jane began to suffer from ill-health, She travelled to Winchester to receive treatment physician where she eventually took lodgings , and died a few months later on 18 July 1817. Jane Austen was buried in Winchester Cathedral.

In commemoration, a new Jane Austen bank note has been unveiled today, the 200th anniversary of her death, it will be worth £10.
A single man in possession of 5000 of them is universally acknowledged to be in want of a wife.
The quote on the bank not is a line from Pride and Prejudice – “I declare after all there is no enjoyment like reading”
Jane Austen becomes the first female writer to appear on a British banknote.
The notes will be issued on 14 September and the public will begin to see them in the following days and weeks

The will of Jane Austen – is currently on display at The National Archives.

A new trail of 12 Jane Austen quotes appearing in 39 locations across Winchester city centre. Pick up a leaflet, an umbrella, and take a stroll in the footsteps of Jane.

A permanent exhibition situated beside her grave in the north nave aisle of Winchester Cathedral. Read about Jane’s birth and childhood in Steventon, the family’s move to Bath, her return to Hampshire, adult life and her writing in Chawton and the final few weeks of her life and resting place in Winchester.

[A Jane Austen Tour and Tea is also available at the Cathedral each month. Price £12.50. (More details http://www.winchester-cathedral.org.uk/).]

This showpiece exhibition will feature first editions of her work, personal letters and portraits from the National Portrait Gallery and unseen collections. In addition, Jane’s pelisse coat is the only garment in the world with provenance that can be traced back to Jane Austen. This is the first time these important collections will ever have been displayed together.

An inspired sculpture trail. The 25 sculptures are all benches, shaped like an open book, and each is designed and painted by a professional artist in a style inspired by Jane Austen’s life and times in Basingstoke, Steventon and the surrounding area.

The trail and the associated app will give the opportunity to explore (and sit in) places and landscapes that were important influences on Jane’s life and work – often undiscovered by visitors. Jane was born in Steventon, and Basingstoke was her local town for more than half her life, this trail will help to reconnect visitors with where she grew up and began her writing career.

Jane Austen by the Sea: A Display at Brighton Pavilion

This display in the Prince Regent Gallery lasts until next January.
Full details from the entry for 17 June above.

Discover the locations used during the making of the BBC’s Pride and Prejudice, including Darcy’s famous pond and the classic Pemberley view. This event is being repeated on Saturday 26 August. Timing: 1.30 to 3.30 pm.

Discover the locations used during the making of the BBC’s Pride and Prejudice, including Darcy’s famous pond and the classic Pemberley view.

Discover the locations used during the making of the BBC’s Pride and Prejudice, including Darcy’s famous pond and the classic Pemberley view.